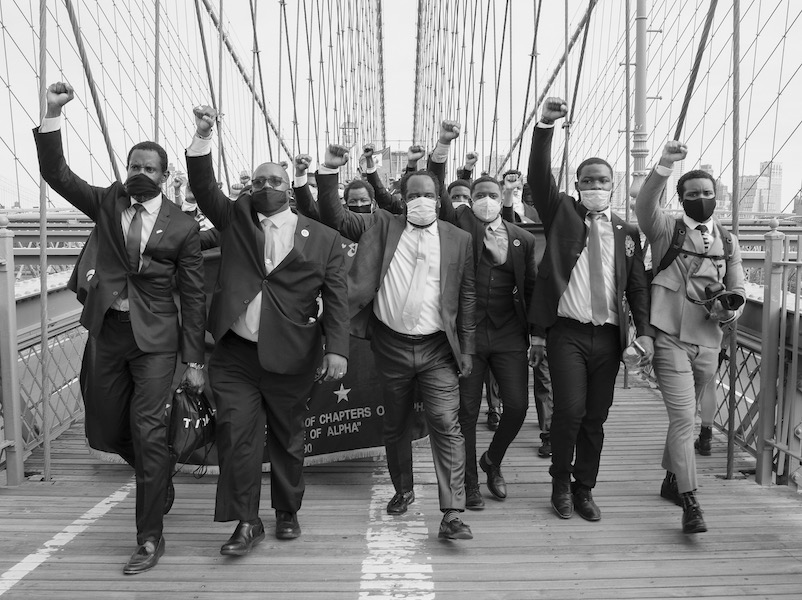 'The singing and chanting of the Alpha Phi Alpha carried us, moving something like five thousand people across the bridge from George Floyd’s memorial in Brooklyn over to Manhattan.  In one moment, they stopped to recite ‘Invictus' by William Ernest Henley – a poem fundamentally about having courage in the face of death and keeping dignity, despite being treated unfairly.  At this point it was a few days into the protests, and each day even more people turned out.  Each day people were even louder than before. Each day we were more committed.'  Aria Isadora, June 2020

Following the brutal killing of George Floyd on May 25th, 2020, demonstrations took place worldwide. People spilled onto the streets to express their frustration and disgust: Another Black body murdered by police in America.  “Enough is enough", they shouted. "No Justice. No Peace."

These global demonstrations led to some truly remarkable photographs being captured.  One, by New York-based photographer Aria Isadora, was impossible to forget.  On June 4th Isadora captured a group of masked and suited Black Americans of Alpha Phi Alpha marching with urgent purpose across Brooklyn Bridge – right fists clenched and raised, towards Manhattan to make their protest heard.

Evoking the powerful images of the 60s Civil Rights Movement captured by Gordon Parks and Ernest Withers, Isadora's image distils the spirit of this year's protests.  It is urgent and moving. It is pained and layered.  In her composition, the men’s masks reflect the global pandemic, marking this specific moment in history.  The strength of their raised arms is echoed in the cables on the bridge behind them, stretching skyward. Their march across that bridge becomes symbolic.  While literal movement from one place to another, it signifies progress from the past to a new future that sees Black Lives Matter.

‘March on Manhattan: The Black Lives Matter protests in a photograph' SHOWstudio